Welcome back to our ongoing Better Late Than Never series, in which we play catch-up on reviewing our favorite games released earlier this year! We’ve all had a crazy-busy 2019, and sometimes life can get in the way of the things you love. While we’re making an effort to slowly revive the site’s regular posting schedule, it’s sometimes difficult to maintain such rigorous posting while also balancing a job and other responsibilities. The good thing about video games is that there’s always someone looking to try them out for the first time, so reviews are never really outdated or useless.

With that being said, let’s dive right in to our review of SUPER MARIO MAKER 2 for the Nintendo Switch. Chances are if you’ve played the first Super Mario Maker game then you know what you’re getting yourself into—but for those of you who haven’t, we’ll quickly summarize the game’s concept. 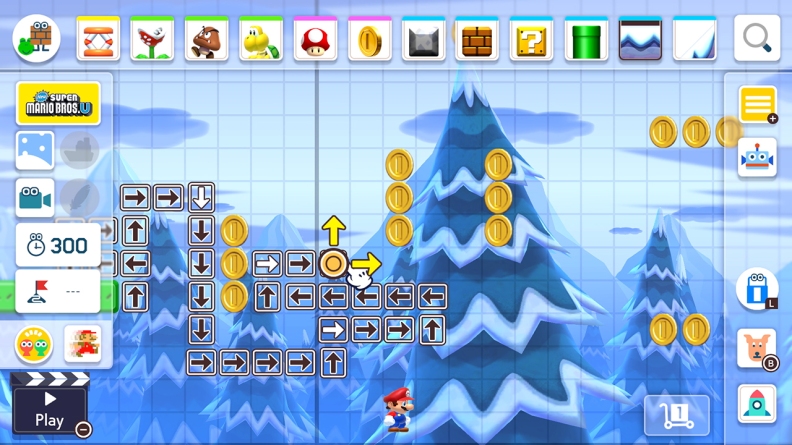 Just like the first game in the franchise, SUPER MARIO MAKER 2 allows the player to design and create their own playable Super Mario courses. The game enables you to design your course under the banner of multiple titles within the Mario game universe, and each course will adjust according to the respective aesthetic of the chosen title. For example, the items you can get and types of enemies you can utilize will be entirely dependent on which title in the franchise you’re using. While the general gameplay setup is the same as the first game, the sequel offers a plethora of updates, new mechanics, and fresh gameplay modes.

New features include the ability to play cooperatively on maps with friends or strangers; which also allows for the creation of multiplayer-specific maps. On/Off switches have also been added to the repertoire of available design tools, which allows for a more puzzle-based map creation. As we’ve seen in the Course World, a database of user-created maps that any player can access, the new switch mechanics have also given rise to popular speed-run style maps. SUPER MARIO MAKER 2 really feels like the definitive user-controlled Nintendo experience. The game takes everything the first title had, and expands upon it drastically; fine-tuning what already existed, while adding enough new content and gameplay elements to keep the game feeling fresh and worth every penny.

The new game also features a Story Mode, which the original did not have. This story mode sees the player playing through a variety of dev-built courses, in order to help a group of Toad workers reconstruct a demolished Peach’s Castle. There’s plenty of secrets to discover, and a surprising amount of courses to complete in this mode, making it a good way for newcomers to learn how the game works, and to inspire fresh ideas for future courses.

Though the game initially struggled with Friend-to-Friend matchmaking issues and various other player complaints, Nintendo has since listened to the feedback and have patched the game to near perfection. Between the many different challenge modes and never-ending user-created course lists, you’ll be hard-pressed to run out of things to do with SUPER MARIO MAKER 2. The possibilities are quite literally endless, as the game’s content largely relies on the limits of the player’s own imagination. This is Nintendo at their finest, and although the game has been out for several months, there’s no better time than now to pick up a copy (especially with the holidays coming up). Nintendo has had a seemingly flawless track record of releases for 2019, and SUPER MARIO MAKER 2 is no exception. This is easily one of our favorite Switch titles of this year, and we can’t recommend it enough!