We’ve been largely AFK this year, and we’ve addressed the reasoning a couple times, but before we set off on this magical review let me remind our readers once more why we’ve been so absent. As Jake had previously mentioned, we started Couch Bandits with the intention of publishing at least 5 days a week, and for the first 6 months or so of the site’s existence we managed to keep up with that schedule. But as we’ve passed our 1 year anniversary we find ourselves hardly posting these days, mostly because life has gotten in the way. This is sometimes how things work out sadly, and we wish we could keep up with the previous schedule, but finding the energy and motivation to keep up with a consistent posting schedule is never easy, and it takes a lot of hard work and dedication.

We’ve been fortunate to have built up an amazing community of guest contributors and regular contributing writers who like us, do this for free on their own time. We’re thankful that anyone reads our content at all, and so moving forward we hope you’ll remain patient with us as we attempt to finally get back into the swing of things. We have a lot planed for the final weeks of this year, and a lot on the horizon for 2020. We may not be posting each and every day, but we’ll do our best to publish at least a couple times a week. Thank you so much for sticking around and for supporting what we do. Now we’ve missed reviewing some pretty big titles from this year, and I’m going to do my part to make up for that with a series I call “Better Late Than Never.” In this first installment, I’m going to be reviewing FIRE EMBLEM: THREE HOUSES for the Nintendo Switch. So let’s get to it!

FIRE EMBLEM is a franchise of games that boasts a sizable amount of titles, and throughout its evolution we’ve seen the series take many different forms. From the classic strategic style to the more hack-and-slash Dynasty Warriors clone, the developers behind these games have always been careful to keep the games feeling fresh and exciting. THREE HOUSES is no exception to this rule, and once again takes the FIRE EMBLEM brand and plunges it into new uncharted territory. While the strategic battle portions of the gameplay remain the same, the game introduces a large variety of new features and exciting minigames. 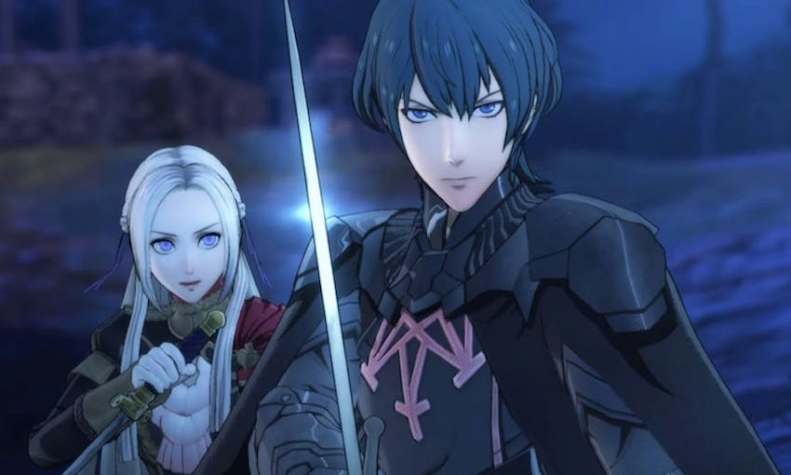 Perhaps the most notable new feature is the inclusion of an open-world-style exploration map, with loads of new RPG elements thrown into the mix. You play as your own personal hero, a professor of sorts in a Hogwarts-like monastery. Also like Hogwarts, the student body is split up into houses, hence the game’s title. There’s three houses to choose from, each with their own unique cast of characters and story lines. Each choice of house will impact the central story significantly enough for you to take the decision seriously, and the game makes it clear that you’re selecting a new family of sorts, through which you’ll grow and learn the ways of the game.

The monastery itself is a blast to explore—loaded with fun activities such as fishing and cooking. These activities act as a way to both bond with the students of your house, and to boost their stats in combat. As a professor, you’re also charged with teaching your students, which comes in the form of lectures. These lectures are designed to train up specific skills and combat styles for each student. As you progress throughout each day, you’re given a limited number of action points to carry out whatever activities and quests you’d like to do while exploring the monastery. With each new day you’re given the option to continue exploring and lecturing your students, or to take them to the battlefield, where the more traditional FIRE EMBLEM tropes come into play.

The battlefield designs are colorful and detailed, with all sorts of treasures and items to discover. The combat is as satisfying as any other title in the series, and I found myself enjoying close-call-victories just as much as the cakewalk ones. It feels rewarding to witness your hard work from the monastery coming to its fruition on the battlefield. You’ll genuinely feel as if you’re influencing the progress of these students, and the game encourages you to strengthen your bond with them outside of combat in order to improve your chemistry in battle.

The more socially-inclined RPG elements are just as much fun as the statistics. One can take any student of their choosing out for tea dates, and shower them with gifts to win over their affection. Though these instances are maybe not as detailed as some RPGs, for a FIRE EMBLEM game, this is a whole new level of depth. All of these ingredients make for a more fulfilling experience, and the game becomes something else entirely. Beyond just being about waging war, the game becomes a story of friendship, love, power, and responsibility. The side quests are fun and engaging, and the variety of activities made available to the player help tie the game together as a towering achievement of entertainment.

Jake, Nick, and myself have all played and thoroughly enjoyed this game, and one particular facet of the game impressed us beyond all others: its replay-ability. As I mentioned before, each house presents a unique central story and cast of characters, meaning each house experiences the game in an entirely different way. This makes the concept of returning to the game awfully alluring, especially since there’s little chance of retreading over familiar ground. For these reasons, FIRE EMBLEM: THREE HOUSES is worth every penny spent, and every hour put into its gameplay. In a time when consumers really want to get the most bang for their buck, you can’t do better than this title. It’s without question one of the best Switch games I’ve played yet, and will go down as one of the most iconic titles in the series. I can’t recommend it enough!