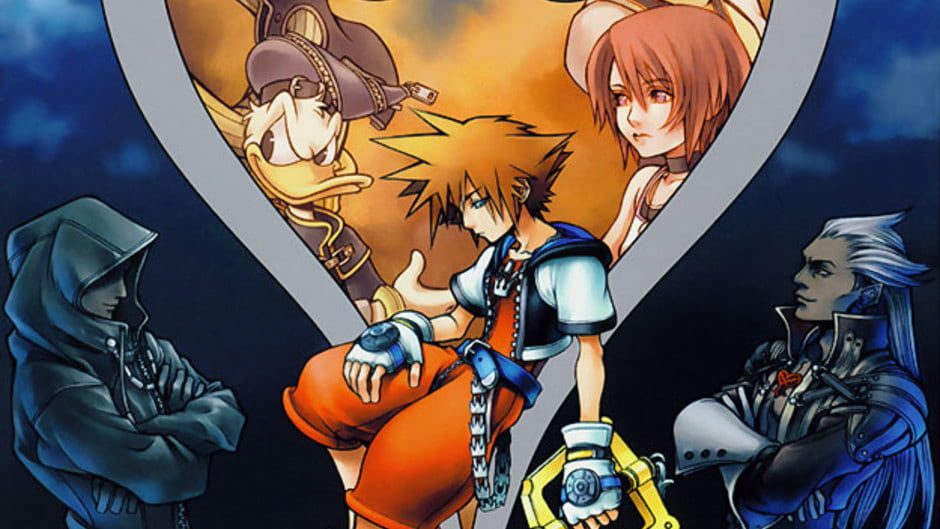 It’s stupid. Everything is stupid. Just looking at the cover art is stupid, never mind thinking about the original concept. An action RPG from Square Enix featuring Walt Disney characters sounds doomed to absolute failure or, at least, an embarrassing curio of the early 2000s. Yet, here stands Kingdom Hearts, on the cusp of the long overdue release of its third installment, as one of the all-time underdog success stories in the video game industry.

But this simple and clean approach to telling the “no one believed in it” story does series Director Tetsuya Nomura and his team a major disservice. It makes every move in the franchise seem not only predestined but an inevitable success, as opposed to the product of an incidental elevator chat between Disney and Square executives (seriously). On top of that, this line of thinking justifies treating the franchise as sacrosanct, a monument to childhood nostalgia incapable of flaws.

Instead of gushing about or shredding Kingdom Hearts like a hot Keyblade through butter, it’s worth examining the series in its “definitive” form on the PlayStation 4, starting with the contents of the HD 1.5 ReMix: Kingdom Hearts Final Mix, Kingdom Hearts Re: Chain of Memories (Re:Com), and 358/2 Days.

The original Kingdom Hearts, released way back in 2002, is the first port of call, an undeniable lightning-in-a-bottle phenomenon for the PlayStation 2. Despite all the years of gameplay innovation and continuity pretzels in later installments, it remains a remarkable achievement in creativity and integrity for what’s ostensibly a licensed video game.

Consistency is the biggest achievement here—even setting aside the clunkiness of early 3D games, having Cloud Strife and Donald Duck in the same room, let alone part of a massive Japanese role-playing adventure, is no easy feat. But even without an attachment to Disney or Square, Kingdom Hearts feels stylistically cohesive—none of the Final Fantasy cameos and worlds based on Disney films stick out like a sore thumb, and playing through them as Sora on his battle against the Heartless remains eminently playable to this day.

If anything, the flaws here have nothing to do with age so much as criticism with the original release that still holds true here. Despite an improved interface, combat and navigation can still be frustrating at times, with a lack of signposting and camera work zoomed in too much on Sora relative to the environment. On top of that, using the Gummi Ship feels both overcomplicated in putting it together and simplistic when traveling between worlds. 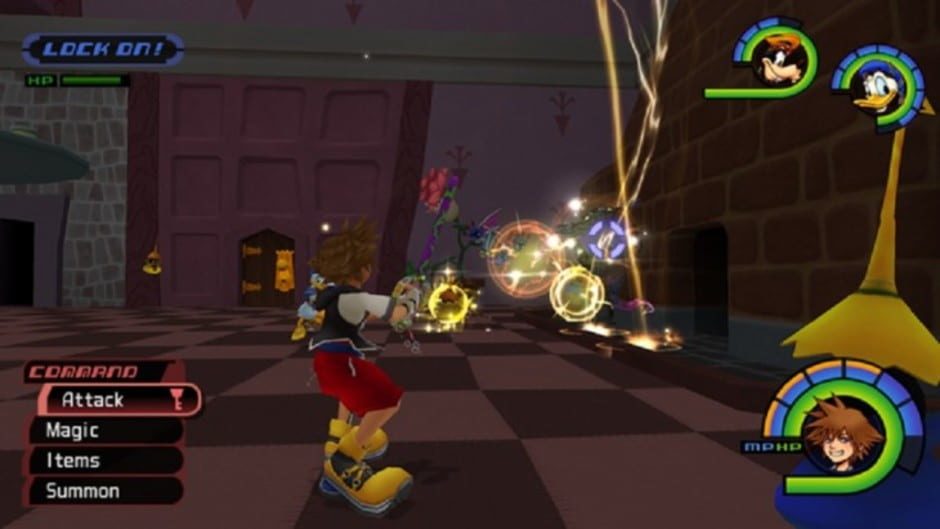 Everything else, however, feels like a game that came out yesterday. Crossovers are nothing new, but this particular mix of Western animation with an Eastern approach to creating a Mouse House multiverse still remains novel. It shows how licensed video games can stand tall on their own merits while still treating the source material with respect, an approach also seen in the likes of Insomniac’s Spider-Man game and Rocksteady’s Batman: Arkham trilogy.

Kingdom Hearts‘s story, admittedly, suffers from a ham-handedness and inconsistent ruleset that have become the two major complaints of this series. While not as bad as later installments, the themes of light conquering darkness and the power of friendship are a lot to swallow, regardless of whether you’re 7 or 27. But that commitment leads to genuine emotional highs and a finale that still packs an emotional punch.

Time and age will play in a part of a game’s perception, but the original Kingdom Hearts remains a remarkable achievement by any standard. Imaginative, surprisingly challenging, and home to one of the best soundtracks in gaming, it’s still worth playing today. 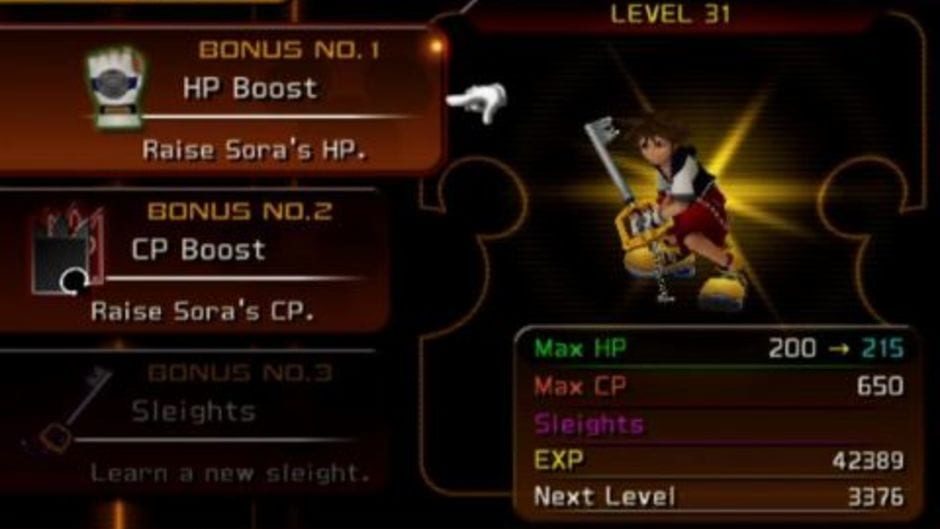 Re:Chain of Memories, mechanically, is a far more fascinating game than its predecessor, despite throwing the larger series canon into disarray. Originally released on the Game Boy Advance in 2004, this 3D remake takes place as the link (or chain, if you will) between Kingdom Hearts and Kingdom Hearts II. Sora, Donald, and Goofy find themselves in Castle Oblivion at the mercy of a hooded Organization, fighting through recreations of worlds in the first game and relying on cards in real-time combat.

Unfortunately, apart from the final act, Re:CoM struggles to justify its existence from a narrative standpoint. Because the worlds retread the original game to a tee, it becomes harder to tolerate what feels like needless padding, a distraction while Nomura whittled away on II. Had they gone further with the memory-scrambling concept, this would be much easier to forgive. That said, the combat system deserves mention for being one of the most fascinating in a game of this type.

While battles take place in real-time, all attacks are governed by a deck of numbered cards, with higher numbers being more powerful. For example, a 9 card played by Sora always beats an 8 card from the enemy. A stat called CP places a limit on your decks, forcing you to strategize and make use of the hand you’re dealt. The cards also apply to exploration, as each room in a world is now generated based on the card used for creating it. It can be frustrating having such randomness in every facet of the game design, and the lack of in-game documentation does it no favors, but using cards in standard action battles can be admittedly satisfying, despite the steep learning curve.

It says something about Re:CoM that it can be pointless and still worthwhile, if only from a game design perspective. Revisiting Castle Oblivion all these years later, the card based battles do hold up and deserve a sequel, if only spiritual, to truly perfect them.

Fortunately, 358/2 Days has no such barrier to entry, and its cutscenes can be enjoyed without problems. Unfortunately, the cutscenes from the Nintendo DS game are the only item in the collection, with a few text descriptions filling in the blanks. While fans consider 358/2 Days one of the worst games in the series, removing the gameplay puts the story into sharp relief.

While the plot sheds light into the relationship between Organization members Roxas and Axel, including how it plays into the opening of II, 358/2 moves at an incredibly slow pace, not helped by how many scenes are spent on a clock tower eating sea salt ice cream. It made sense to have a faux-episodic story structure on the DS, since portable games are best played in short bursts, but on a console, the padding comes off like artifice, even if the emotional payoff is worth it. Give it a single watch for the story context, and move on.

In the end, what we have with I.5 is an outstanding first entry supplanted by two uneven but worthwhile portable spinoffs. The collection shows its age and has a few issues, but Kingdom Hearts alone justifies the set. Thankfully, the PS4 version bundles 1.5 with its sequel collection, HD II.5 ReMix, the contents of which will be discussed…at a later time.

To be continued in Episode II.5: Unlocking True Potential.

One Reply to “Kingdom Hearts Retrospective, Episode I.5: Opening the Door”