Whether it’s of being a werewolf, an imitation from another planet, a fascist dictator from the early 20th century, or a tanner that is simply fed up with his lot in life and longs for the sweet release, my friends and I love accusing each other of being things in board games. Often categorized under the genre “social deduction,” this style of board game tasks players with receiving a hidden role of some kind and then figuring out who the other players are. Some games have this mental game of wits, logic, and lying as the entire premise, as is the case with the Ultimate Werewolf series or Secret Hitler, while for others the social deduction is only part of the battle, as it is in The Thing. To watch us and some friends play Secret Hitler as well as The Thing and other games, watch the video from our Game-A-Thon live-stream.

Bluffing and board games have a long history with each other. I mean, there’s a reason poker is as popular as it is: lying to your fellow players, even just through your reactions, about what you are or the quality of your game status is fun. Social deduction games make it easier than ever to enjoy this normally-taboo goal by removing actual consequences outside of the game, giving assigned roles clear motivations and actions, and giving you something fun and goofy to accuse your friends of being. 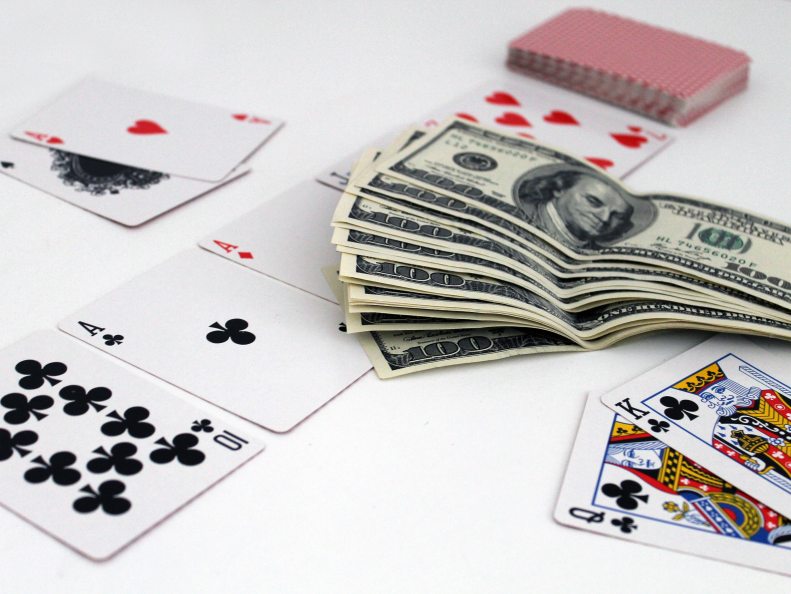 All of my friends have latched on pretty tightly and quickly to this newly-defined and catered-to genre. Werewolf, when we have a big enough group, is almost always a given to play and there is just something satisfying about claiming to have control of a duke in a game of Coup, letting you collect more credit chits than most of the others while preventing competitors from staying close with foreign aid. There is simply something cathartic about pointing at a friend and calling them a liar and a literal monster.

Perhaps part of the appeal is the asynchronous game-play inherent with this style of board games. Betrayal at House on the Hill (as well as Betrayal at Baldur’s Gate and Betrayal Legacy for that matter) has a second act to each game where the Haunt is revealed and a traitor among the group is named, completely changing the dynamic of the game from exploration and survival to “us vs. them.” In those games, aside from perhaps a few haunts where the traitor may be hidden in Legacy, the group is aware of who the traitor is and there is no actual lead-up to the act: it’s random and determined by dice rolls. However, both the traitor and the survivors have special, secret knowledge about what their goals and abilities are, adding tension to this final part.

Lastly, I want to take time to give a special mention to the Jackbox series of game collections. While in some ways being video games–requiring a computer or video game console to display the game and each participant to have a smart phone to input answers–these collections share more in common with board and card games. Everyone hangs out in a living room, reading the room for the best answer that will get the most points or at least laughs. While most games in the collections ask for some degree of subterfuge, if only so that people don’t vote against you because you are winning, a few stand out for their lying-centric game-play.

First up is You Gotta Point, a game where everyone receives a prompt on their phone that they must respond to in a certain way. The catch is that one person does not get the prompt and must fake their way through three rounds of excruciating poker-face. Tasks include pointing to someone in the room that best fits a concept, holding up a number of fingers that corresponds to how many of something you own or how often you do something, and raising your hand if a statement is true for you. As the Faker, you have to be fast at reading what people are doing and what you should do too. Or just be a great guesser. But you also need to be able to have accusations slide off you like water off a duck’s back. 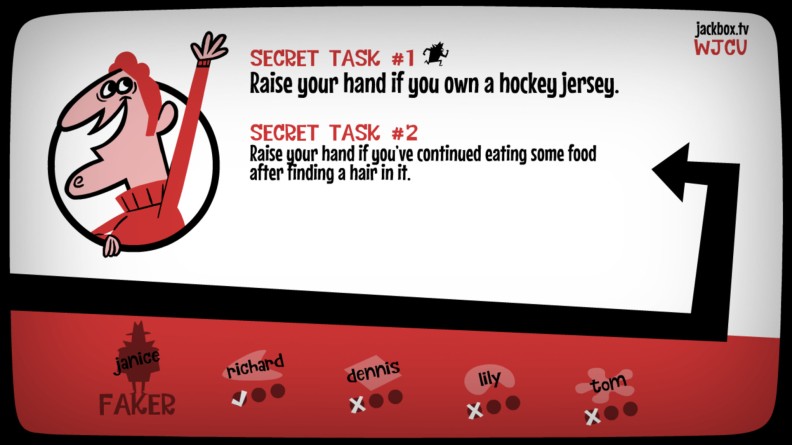 Monster Seeking Monster is a fun, snarky dating game where players are different monsters with different abilities and modifiers that are all signed up for a dating app similar to Tinder. You send saucy messages to each other to try and coordinate dates, only able to actually go on a single date each round. Certain monster abilities severely impact other players, which is why you need to be careful to get enough points to win without so much that your identity is revealed. 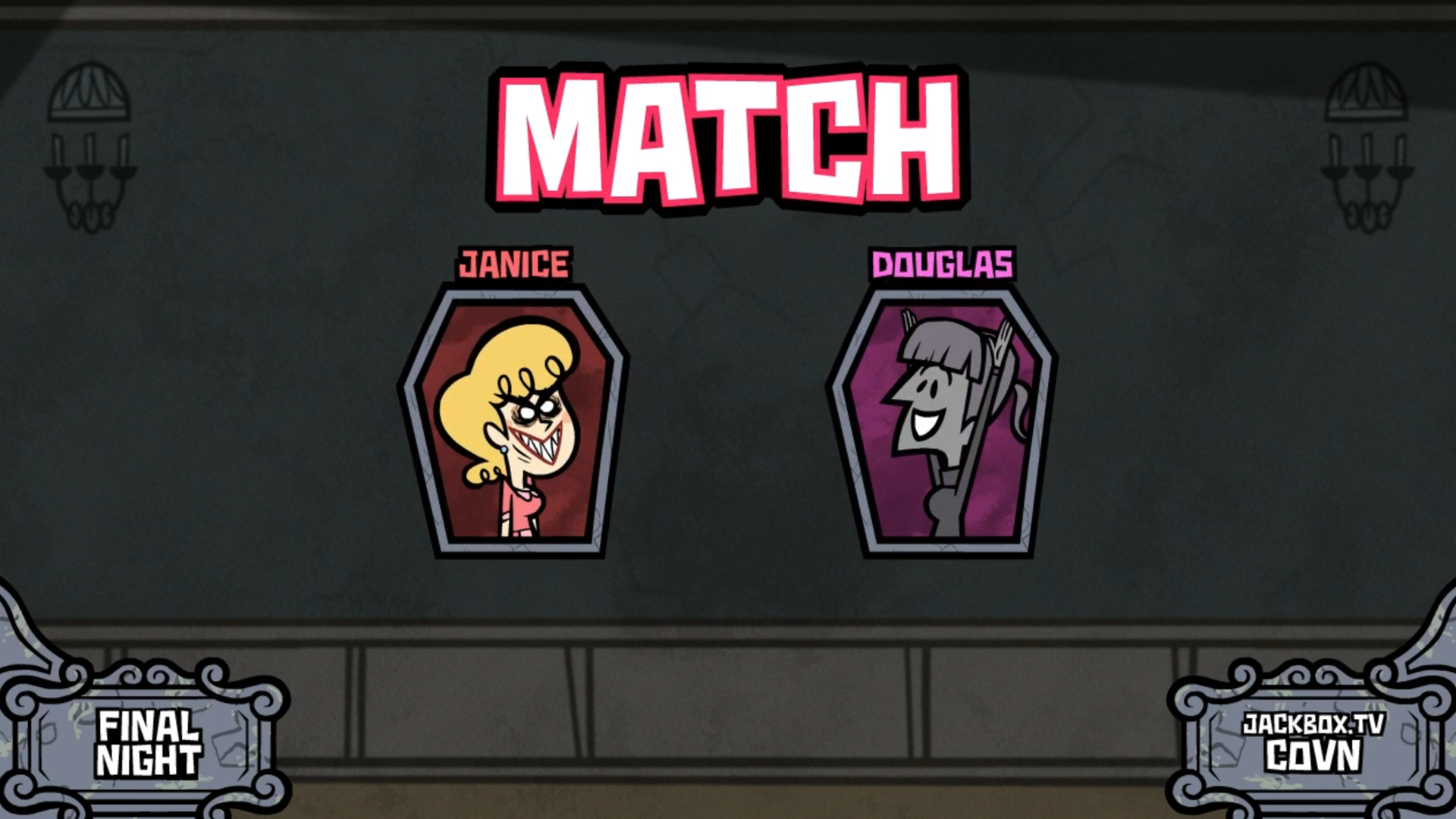 Lastly, Fibbage is a classic, tasking players with filling in a blank for a bizarre and unbelievable factoid. Once fake answers are submitted, everyone needs to try and select the actual correct answer from a see of false answers. Often filled with funny, immature joke answers and a few believable choices, it’s a tough game that flexes your creativity and makes you think of something that is likely to get people to select.

So head to your friendly local game store (or Steam page for Jack Box) and pick up a board game so you can be a cold blooded liar right to your friends’ faces without getting in trouble.