Perfection and video games rarely go together. Contrary to what fanboys, 10/10 scores, and marketing teams would have you believe, no game is for everyone, nor will everyone “get it” at first glance. One of the few games that comes close is Tetris, a puzzle game so ubiquitous a description would be redundant. Even here, modern takes have been inconsistent and, at worst, exploitative. Dare I mention how EA tried jamming an online subscription into the latest mobile ports?

The latest incarnation on the scene, the PS4-exclusive, VR-ready Tetris Effect, presents an interesting case. Tetsuya Mizuguchi and his studio Enhance are no stranger to games with a focus on transcendence, including the recent remasters of Mizuguchi’s own Rez and Lumines. With a combination of basic mechanics and dynamic play environments that contribute to and interact with player inputs, the emphasis lies on taking this minimalist, immersive approach and mixing it with a game so addictive it remains in the mind for long afterward—the “effect” of this game’s title.

But does everything fall in its right place for the latest version of Tetris, or is it effectively just another brick in the wall?

In Soviet Russia, Game Plays You

From its inception in 1984 by Russian designer Alexey Pajitnov, Tetris captivated audiences by being the pinnacle of “easy to learn, hard to master” design. Dropping each of the four-block Tetromino shapes to form straight lines is easy enough, but the challenge comes from various factors and minor additions throughout the years. Speed increases, hold queues, soft vs. hard drops, and mixing it up with Sonic Team’s mean beans in Puyo Puyo Tetris provide layers of strategy that reveal themselves over time, providing the backbone for a strong competitive scene at the hardcore level.

Mizuguchi and Enhance Games change not so much the game of Tetris as the area around it. The main feature of Effect is Journey Mode, a collection of 27 backgrounds split across 7 areas, with themes ranging from cool downtown jazz to a desert that changes into the moon (seriously).

As players clear lines, the areas change dynamically, affecting not only the background visuals but even the speed at which the blocks drop, with surprising results. A casual round with dolphins in the ocean can go to a fast-paced marathon after just clearing 10 out of 36 lines.

This may sound frustrating for those looking to just kick back and enjoy the light shows, but there’s a reason the Theater Mode, which does just that, has to be unlocked: By playing Tetris, you’re essentially playing music. Every rotation, movement, and cleared line adds to the song with sound effects, and while nothing is ever off-key, that additional layer serves as the connection point between these audiovisual abstractions and the mechanical nature of Tetris.

Nowhere is this connection more evident than the Journey-exclusive Zone mechanic. With a tap of the L2 button, time slows to a crawl, and cleared lines move to the bottom of the play field, all exploding in spectacular fashion. The fact this mechanic is earned embodies how Tetris Effect makes players, or rather, the player, earn their transcendence.

This leads to the one elephant in the room and possible dealbreaker: There is no competitive multiplayer in Tetris Effect. No couch versus modes, no online play, nothing. One can argue an “experience” like this should be shared by as many people as possible, especially in the same room. But given how Effect focuses on creating as pure and direct a connection as possible between player and game, this omission is understandable. Especially when the aforementioned Puyo Puyo Tetris comes much better equipped as a party-friendly alternative.

That’s not to say no additional modes exist, however; Journey mode is complemented by a selection of gameplay styles known as Effect Modes. They run the gamut from Classic options (Marathon, Sprint, Master) to more experimental, Adventurous styles (Countdown, Purify, and Mystery). They work well in highlighting the different aspects of Tetris play, and worldwide Weekend Rituals encourage variety. These weekly events give players a point total to work for by playing one of the four categories of modes: Classic, Relaxed, Adventurous, and Focus. Meeting the threshold unlocks special avatars, alongside an experience bar that rewards players with extra themes and avatars. While slight, they offer a nice incentive on top of the already immaculate mechanics.

Good to the Last (Hard) Drop

This sounds like an objectively flawless review, but such is how Tetris works: It wouldn’t have lasted this long as a cultural icon if it didn’t. Effect can only do so much to modify the formula, but what’s here is nothing short of resplendent. 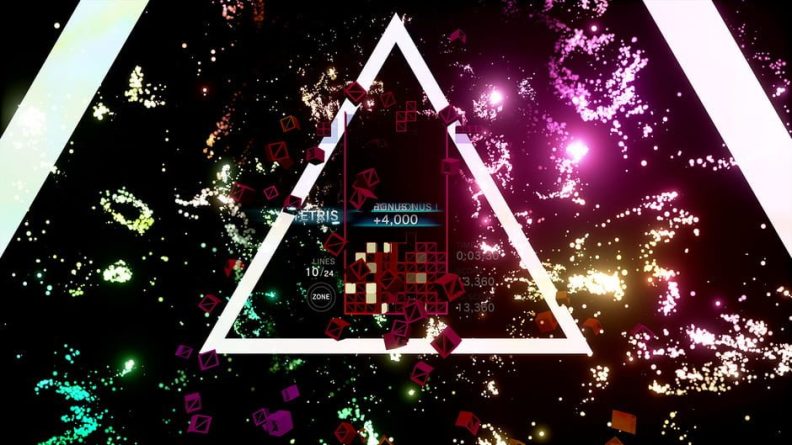 It may not be the version of Tetris that appeals to everyone, especially with the lack of proper multiplayer, but what’s here is arguably one of the finest versions of the game ever released.

Whether you’re a seasoned Grand Master or in it just for the pretty lights, it’s hard to argue with perfection.