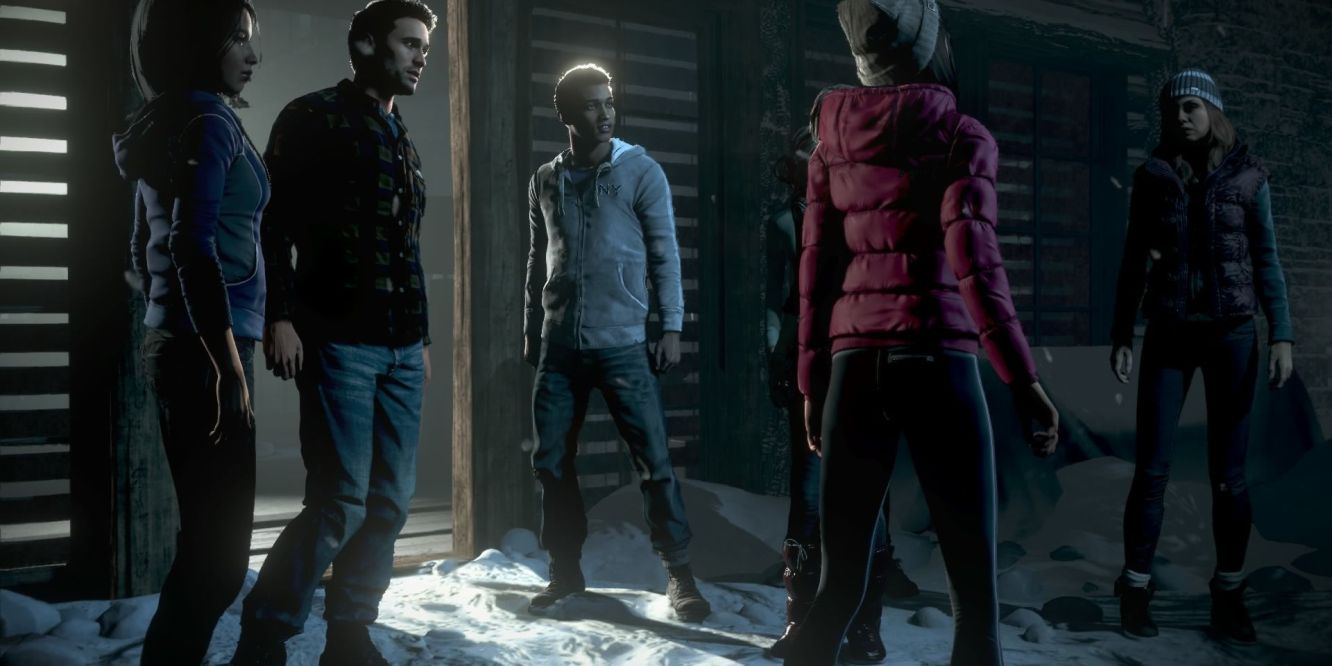 I know I’m a bit late to the party here (3 years, to be exact), but last night, I really wanted to play a scary game, and Until Dawn seemed like the perfect choice. Why submit myself to that torture? Because Halloween is only a few days away!

Besides, the day was gloomy outside. Wind and rain pelted the house, so I didn’t want to leave. Instead, I set out to upgrade the internal hard drive of my PS4, because 500 GBs just wasn’t cutting it anymore.

Now, I’ve got a glorious 2 TBs, and what better way to celebrate all that storage space than with a massive digital download, like that of Until Dawn? I’d also been rewatching some playthroughs of Detroit: Become Human, so I wanted some gameplay along those lines, and I knew Until Dawn was similar in a lot of ways.

And so, my journey began…

Embracing the Butterfly Effect in Until Dawn

First off, this post will have no spoilers: I’ve only completed the first six chapters, but I wanted to share my thoughts after a bit of play. I plan on doing a followup post once I’ve completed the game, so you can see how my first impressions have changed from start to finish, so make sure to come back and check it out a few days from now!

Now, let’s get down to business. Right off the bat, Until Dawn introduces you to the concept of the Butterfly Effect. This idea revolves around making a choice that will forever alter future events. For instance, say you came to a fork in the road in the wilderness. If you choose the left path, you get home safely. If you choose the right road, you end up getting mugged and lose all the money in your wallet. At the time, you have no idea of knowing the outcome based on your choice, so you just need to make one.

Now, imagine a game completely based on this concept. It’s kind of intimidating, right? Especially knowing the game is survival horror. You never know what will happen if you make the wrong choice, but the game teaches you early on you need to live with your choices. Accept them and move on.

That said, the game does give you some glimpses into the future through mysterious “totems” you can find. These will show you a choice you may make in the future or a premonition of things to pass. Equipped with this knowledge, you can make more well-educated guesses than just blindly shooting in the dark.

I love the idea of an entire game based on the Butterfly Effect, and I also love the addition of the totems, as it’s a clever way to encourage players to explore the game to find each and every clue. That said, you can’t go back and replay parts of the game that didn’t go so well, unlike Detroit: Become Human. If a character dies, that’s it. You need to accept their fate and push forward.

Some may not like that idea, because they want to save all the characters or it may feel unfair when you lose a character because you missed one quicktime event action (not speaking from experience at all…), but this rule does encourage replayability. Even though I haven’t finished the game, it can’t be too long, as I managed to get through six of the ten chapters in one sitting.

And replayability is actually very well worth it in Until Dawn, because the more you play, the more you get to know each character. From my understanding, you need to act and choose decisions based on what each character would actually do according to their character traits. It’s a fascinating way to frame a story, especially in a medium where the player often projects their own personality onto the character they’re playing.

Here, you are a spectator, and you are trying to successfully run a story according to its characters. You need to put your own mind aside and understand who these people are to save them all. And if you mess up, there will be consequences. Serious consequences.

Falling off the Couch From Jump Scares

Speaking of consequences, I messed up a lot. I also messed up a lot in Detroit: Become Human, so I’m used to failure. Oh no, my favorite character’s story just ended prematurely? Welp…time to push on regardless.

But seriously, I’ve really enjoyed my time with the game, even though I haven’t played it perfectly so far. I feel like it was designed to be messy your first time through. You need to learn from your mistakes and start over!

I have no qualms with playing the game again. Everything about Until Dawn is wonderfully executed, from the gorgeous graphics and creepy atmosphere to the clever writing, character development, and musical score. Together, it makes for a fun time, even though the jump scares scattered throughout the game sent me flying off my couch once or twice…that’s what I get for playing in the dark past midnight.

Overall, I’ve been having a blast with this game, and I’m excited to continue! My followup will likely focus on more specific plot points, so feel free to come back and check it out soon. If you’re looking for a spooky game, perfect for Halloween, I highly recommend Until Dawn. But if you’d like some other recommendations, check out this post: The Best Halloween Video Games to Play This October

6 Replies to “First Impressions: Until Dawn”